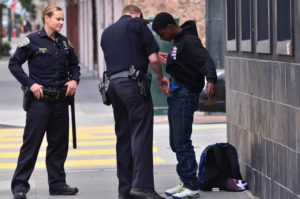 I finished emceeing a gig in Nashville and headed straight for the airport. A massive storm, causing flash flood conditions, moved in turning the sky apocalyptically gray, leaving soft motorists pulled over with blinking hazards, as the brave blindly trucked on. I pulled up to the terminal and traded driving duties with a coworker who was staying an extra day to take in the cultural sites of Nashville. We said our goodbyes as I lugged my equipment to the curbside check in. I was checking one bag filled with games that were played earlier in the day at a corporate team building event. My carry-ons consisted of a backpack, and a suitcase containing a portable speaker and microphone. After saying peace to the checked bag, I entered the terminal and made my way to security.

As I walked up, I noticed a nice scene that I was trying to make sense of. It looked as if it was a father saying goodbye to his son before he left for college. The man was a white adult in his 50’s with a haircut of a pastor. He wore khakis, nice brown shoes, and a tucked in polo shirt with an insignia on the left breast. The young man was African American, tall, tattooed, and had dreads that were tipped with bleach accents.  He wore basketball shorts, a t-shirt, and had a small backpack. As I watched the older man dispense his closing advice, I realized his shirt had a logo of a local college. Oh cool… I’m watching the tail end of a recruitment trip. The coach’s left hand was on the young player’s shoulder as he was finishing his last sales pitch. The young man was taking in the information and nodded agreeingly as he took a colorful brochure-like folder from the coach. They both smiled and the coach stayed to see the young basketball phenom show his boarding pass to enter the security line. I was so impressed that the coach dropped him all the way to the security line. He could’ve easily left him curbside outside the terminal, or parted with his companion at check-in, but no this guy was a class act…walking him right up to the last point a non-passenger can go. Perhaps he knew what was to come.

I happened to file right behind the player and showed my boarding pass to allow me to enter the dreary, dead-eyed, ritual that is TSA security. As we waited to show our ID at the first checkpoint, we ran into the first line of defense. A jolly 70-something African-American TSA officer that seemed to be there to make small town small talk with each person on line.  The man was riding the line between friendly and a cartoonish version of a minstrel show character that most younger black men would despise. “Look at you tall boy! That height up there! Where you headed young man?,” the stereotypical uniformed man asked. “Headed up north my man,” the player replied as he was getting his photo ID in order. “Well good for you good sir. You take your talents to the North.” I couldn’t make this up. As the player stepped forward, I knew I was next to field the outdated questioning of this man who appeared to be newly released from a time capsule. As he asked me a question I knew I’d struggle to answer, I noticed the man checking ID’s had a partner that was shadowing him in what looked to be a training exercise. As my eyes scanned the workers around the x-ray conveyor belt and the millimeter advanced screening technology, I realized every TSA worker had a “shadow” training alongside. After knocking out my personable reply to the man who hasn’t realized it’s 2018 yet, I stepped forward and started loading my carry-ons to the belt.

I untied the shoes, shoved my wallet and phone into the backpack, and hurled my portable speaker onto the deathray knowing I’d have them inspect my electronics on the other side. As always, after stepping into the magnetic device scanning my body for three seconds, I put my hands above my head in a Roca-Fella formation – as the diagram shows – and said “HOV!” as the ominous cancer causing machine supplies me with a moment of questioning the long term effects. I stepped through and saw the “OK” lettering across a green stick figure of a human on the monitor. I walked forward to collect my backpack and my tub of personal belongings and saw that my portable speaker has already been flagged for further inspection.

As I claimed my bag and struggled to put on my shoes, I agreed to the expected search of the speaker bag. As the bag was being unzipped I knew I had nothing to hide so I looked around my environment. I saw the basketball player.

The young man that I saw before was now hand-above-head with two TSA officers thoroughly inspecting his shorts. The lead man was old, white haired and balding. The other TSA man was younger, white and green. At first, I thought ‘that figures,’ this guy is gonna get the extra pat down. But then, upon further inspection, I saw the extent of the treatment. The older man was aggressively searching the young man’s shorts. He passed his plastic gloved hands on the inside waistband of the basketball player and swooped around the perimeter and then dipped his hands down the  front side genital region.

I immediately thought something was wrong.

I glanced back at the two people tending my speaker bag and knew my concern was not in that direction. My eyes stayed on the young basketball player. This time, the old man took the backside of his hands and pressed against the boy’s buttocks. It was not a graze, but a press. A press that was done several times. Even I, a conveyor belt over, could see there was nothing else to look for. He’s wearing mesh basketball shorts for whoever you pray to’s sake. I’m now at two alarm.

The ladies who were handling my speaker asked if I wanted to repack it. I obviously told them to repack it themselves. My eyes were locked on the young man that was now suffering a groin inspection where the old guy, kneeling behind, was dipping his hands below the young man’s balls. The young athlete looked up, eyes closed, and began shaking his head in disbelief and shame. He was beaten.

I immediately walked up to the assaulted and asked, “Are you alright brother?”

He looked at me and said, “It said OK… the screen said I was OK. I don’t know what they’re looking for.” The TSA guys at first ignored my presence. But then there were groups of people, white people, that decided to take in the spectacle of a black man being searched in front of the public.

I told the gawkers, “Keep moving my man…keep moving guys…get outta here dude…nothing to see.” That’s when old boy looked at me.

I told the young player, “I’m not leaving till we’re done,” then I directed my question to the man that’s doing a third round graphic groin search.

“What are you looking for?,” I asked.  The TSA trainee looked shook. He knew they were crossing a line.

The young player looked helpless and became teary eyed. He asked,”What are you looking for? I have no pockets. It said I was OK…it was green!” I noted, “this is assault,” and then the old man realized he was getting too much attention. I grabbed my phone in a nonverbal threat to record what was happening. The old man immediately stood up, quit his jollies, and told the young man to collect his properties.

The TSA officers scurried away as the young man picked up his sling bag and wallet.

I said, “What the fuck was that about?”

The frightened youth said he had no idea why that happened as he was wearing basketball shorts without pockets and that the magnetic scanner detected nothing on him. He revealed to me that he was wearing no underwear under his shorts and that the TSA officer went underneath his scrotum and was ‘almost massaging it.’ I immediately apologized for the treatment that he received, saying that he didn’t deserve any of it. The full-ride scholar said, “I’m out here on a recruitment trip man… what explosive do they think I have? I’m on my way to Massachusetts for another tour of a university… I don’t have anything on me.”

I told him that this didn’t look too good for his prospects in the city of Nashville. He said, “Fuck no!

As I walked him to his gate, he said that he appreciated having someone there as it was happening. Someone there to at least acknowledge that this was not right. He told me that it meant a lot to him to have another human stand by him as he was being physically assaulted by a cheap badge for no reason except for race and appearance. I confessed that I should have done more. I should have made some more noise.

He said, “No. Not at all. I’m just happy you said something.”

As time goes on, it’s become clear to me that nobody has things completely figured out. People fake it. Everyone fakes it. In the age of social media, people have become their own public relations firm. Every day people fire out posts, or modern day press releases, letting everyone know that they’re killing the […]